M*A*S*H is a TV series from the 70s and the 80s that I used to watch on the Paramount Comedy Channel (Now ShowComedy) a couple of years ago before they stopped it, two weeks ago I saw Season 1 and 2 in the DVD renting place so I got them and watched them.

M*A*S*H is about an American Mobile Army Surgical Hospital in the Korean War and the way the staff is dealing with the war.
“Hawkey” Pierce, the main character is a sarcastic surgeon that hates the war, his friend “Trapper” McIntyre is basically a slight variation of his character that’s just a little calmer, together they “ruin the war” for Major Frank Burns, a cheap person that’s also a bad surgeon and Margaret “Hotlips” Houlihan the head nurse, they do all this while showing us the ugliness of war for everyone participating in it in a funny unique way. 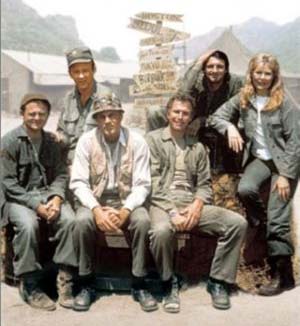 You should really watch the show it is entertaining and funny and it keeps getting better as the episodes pass (season 2 is better than season 1 in my opinion) All the seasons have been released to DVD so I hope the DVD store gets them soon!

I have been watching M*A*S*H since i was in Jr. High School and I have been out of High School for over 25 yrs now. I have seen Every episode from the Pilot to the Season Finale at least twice. I cant get enough of this slap-stick type of humor. I love it from Hawk-Eye and Trapper when they team up on Frank Burns, to when Hawk-Eye and B.J. team up on Charles E. Winchester. I also like the way the rising stars found their way to the big screen by starting on M*A*S*H folks like Patrick Swayze , Laurence Fishburne, and others. One of my Favorite episodes is when Alan Alda is playing along side his Real Life father and brother at the Aide Station .