Today i noticed a new section on Alfa’s website, a media corner. The media corner is basicly a list of links to Alfa’s pages on different Web 2.0 websites. The idea is very interesting! they currently have a Youtube page, a Twitter page and a Flickr one. The Twitter page is the most interesting one in my opinion, I checked it and they are posting information about updates and replying to user coments. I don’t have a twitter account yet and I don’t think I’ll open one any time soon but it’s nice to see Lebanese companies using web 2.0 to better reach out to customers!

MTV is finaly back!

We finaly have a version of google made for Lebanon! www.google.com.lb! Does anyone have any info about it? Do you know what the 4th language is? 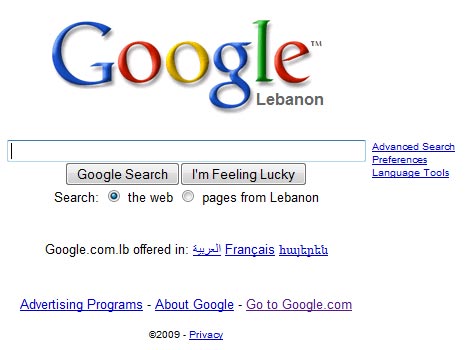 Everyone knows the state the Lebanese roads are in, Potholes are everywhere and with time you get a reflex that enables you to move away from them. I have a good experience escaping from them since I have to drive on the road linking Mont La Salle to USJ Mar Roukoz every week and on this road there are more potholes then asphalt.

Unfortunately sometimes your reflex doesn’t work and you fall in one of the trenches and this is what happened to me last week! I was driving on the Antelias highway and I was going to go up on the bridge when I fell in one of the potholes! The car shook, I figured that was it but I was wrong! we started hearing a “flap flap” sound coming from the right front wheel. I moved to the side of the highway where 2 cars were already parked (victims of the pothole too) and checked the wheel, it was flat on the ground!

There’s a shop that fixes tires on the other side of the highway so i decided to turn around and get the tire fixed. When we arrived to the place there was already a guy getting his tire fixed and it turned out he fell into the same pothole. The Egyptian running the place quickly removed the wheel and checked it, my rim was bended but the tire was still okay! He hit the rim with a hammer to straighten it but told me that wasn’t enough I needed to either get the rim fixed somewhere else since he can’t do that or put a “chambre á air” in the tire. I told him to just replace the tire with the spare one. 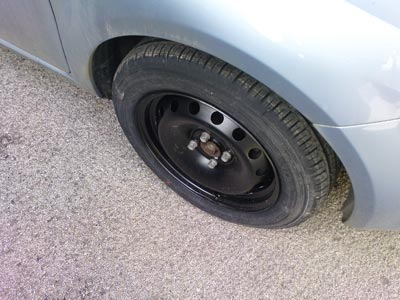 All this happened on Saturday night, so on Sunday morning I went searching for an open tire shop and found one in Antelias, he quickly fixed my rim and put the old tire back in place, but while returning home I noticed the car was lightly turning to the left while driving and since I had already scheduled a maintenance check at the dealership for the following week I decided to tell them about it and get it fixed there. It didn’t turn out to be something serious so they just fixed it without charging me for it and now my car is back like new!

That was last week and the hole that damaged 3 other cars on that hour of that night is still wide open! I wonder how many cars this pothole breaks everyday!

Did you ever fall in one of the trenches on our road? What happened to your car?