Today I had the chance to participate in the celebrations the army did in Fouad Chehab Stadium to celebrate the victory of Nahr El Bared and to commemorate the martyrs. 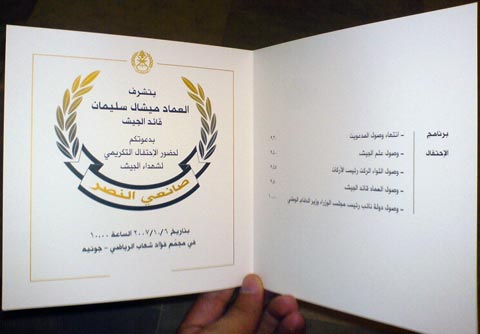 I went to the ceremony with two friends, we met at my place, went to eat breakfast and then we headed to the stadium. On the highway after the “Nahr El Kaleb” Tunnel we started seeing army APCs on the side of the road but the traffic was normal so we reached Jounieh in 10 minutes. To get to the stadium you have to leave the highway and go up a bridge, the bridge was closed by the army and only people invited to the ceremony were allowed to pass, we showed the invitations to the soldier so he allowed us to go through. The cars on the bridge were moving really slowly and soldiers were standing between the cars rechecking everyone. On the bridge we were the only people in a “normal” car! All the other cars were either military vehicles or normal cars with tinted windows so you couldn’t see who was inside of them. While waiting on the bridge a soldier wearing military pants and a black T-shirt (not the uniform) gave us pictures of General Michel Sleiman, when we finally passed all the checks on the bridge we went and parked the car in a parking near KFC and headed to the stadium.

When we finally reached the stadium we went through a metal detector and like everytime it beeped when I passed so a soldier searched me with a hand held metal detector. After we got in we went and sat in the places reserved for us and waited for everyone to come. A booklet containing the names of every marty, a flier with the names of the red cross martyrs and a Lebanese Army sticker were available on every chair. 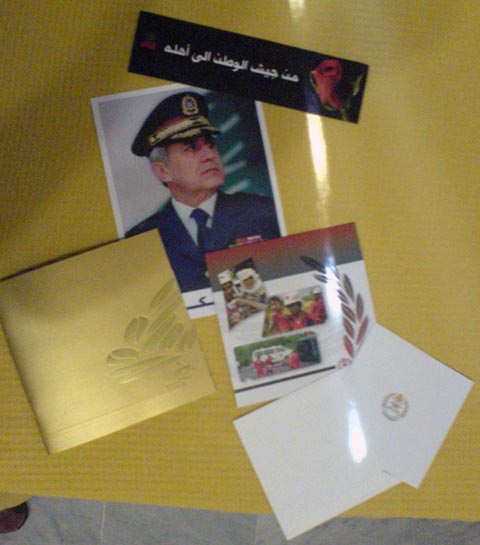 While waiting we saw the Iranian Ambassador (Very easy to spot he was the only one wearing a suit without a tie!) arriving, we also saw Issam Abou Jamra, Mel7em Karam, The British Ambassador, A Hezbollah minister (forgot his name) and nearly every military attaché of every embassy. After everyone arrived The Flag of the Lebanese army arrived, followed by the chief of staff, the Army commander and finally the minister of Defense.

After the army commander saluted all the soldiers 4 Gazelle Helicopters flew over the stadium at a really low altitude. The ceremony then started with a speech read by the father of Martyr Roy Abou Ghazeleh in the name of the families of the martyrs, this speech was followed by another one by the army commander. After the speeches medals were awarded to the regiments that participated in the Nahr El Bared Battle and to the families of the martyrs. 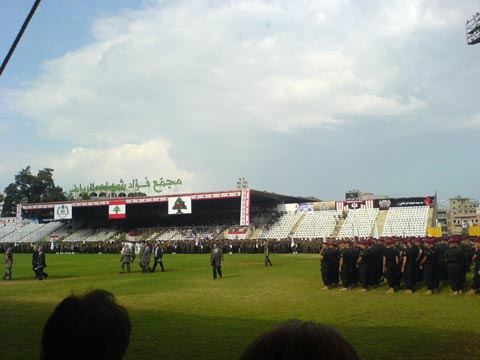 After all the families received a medal the military parade began. All the soldiers that were in the stadium left it and then each regiment started to enter the stadium again. The march of every soldier was synchronized with the other soldiers in the regiment making the parade really beautiful to see. The soldiers would march and when they would reach the area that was in front of the commander a soldier would say the name of the regiment and all the soldiers in it would turn their heads at the same fraction of the second and look together at the commander! Swiss watches are not that accurate. After a while the regiments that participated in the Naher El Bared battle started to enter, the music changed and the march of the soldiers changed too, the soldiers in those regiment ran simultaneously and it was really nice too! During the parades Helicopters first circled over the stadium and then went to the sea side to return and fligh quickly over us doing a really beautiful maneuver.

The parade ended after all the regiments passed. We searched for the friend that invited us to thank her but we couldn’t find her! Instead we saw the commander of the UNIFIL, the Iranian Ambassador (again) closely followed by the American one and a couple of religious men from all sects and religions.

When we left the stadium we headed to the car, the British Ambassador was in front of us with a couple of bodyguards, at one point she jumped twice for an unknown reason so we laughed a little and went to the car to head back home.

The ceremony was really nice; The army deserved it after two years of hard work and after having all the usual ceremonies cancelled due to wars or assassinations. I just hope that next month when we see a new military parade on the Independence Day the country will be more stable. 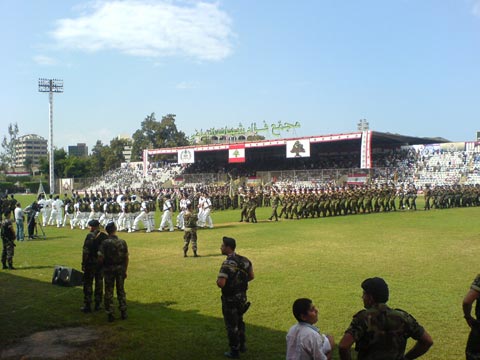 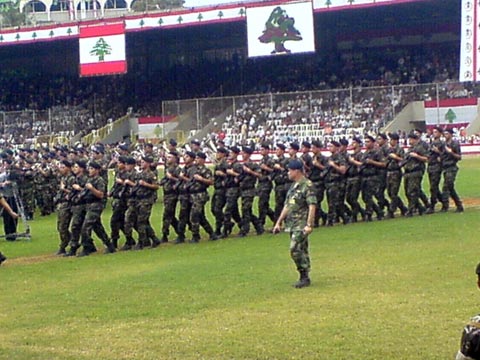