The regiments of the army that participated in the Nahr L Bared Battle are now returning to their bases, people are gathered at some places and a lot of people are driving in their cars holding Lebanese army flags, Lebanese flags and sadly some political party flags (One car was just holding a tayyar flag!).

Here are some pictures from the Antelias-Jal El Dib area I took a couple of minutes ago (as you can see kids are on the streets so TV channels can stop the cartoons and be Lebanese for a while). 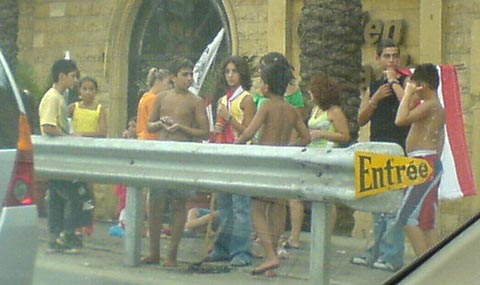 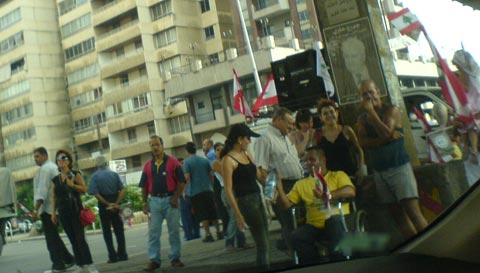 Hello. I just found this site and I am reading some of the blogs. I justed wanted to correct something here. You claim that only OTV was showing the return of the soldiers. Well I don’t get OTV on my cable system, however, I did watch it Future Tv, New TV and LBC.
this is an interesting site but it seems that participation is low

Hi Mike,
OTV was the only one showing the return of the soldiers when I wrote this post, I don’t know if other TV channels were showing the return when I wasn’t home. After writing the post I switched to NTV and it was showing the festivities in Jbeil for a while but didn’t continue to show the return and stopped after a while.
Thanks, the blog is still less then a month old so I hope participation gets higher soon.

Since you are new and I own a network store, I will keep watching for a bit and if things are cool, I may put your site as the default for all my pc browsers. Good luck.

I forgot to ask one thing, why all the ads for Israeli products????????

The ads are from google so you get the ad depending on your location and the keywords in the page so if an Israeli publisher chooses to have the word “Lebanon” in a page for his ad to show up, there is a big probability it will show up here, I can set up some filters but I never got Israeli ads while surfing so ur the first person to tell me and I’ll see what I can do about it tomorrow.