The Sawfar bridge on the road leading to the Bekaa valley was the Highest bridge in the Middle East, that was until Israel bombed it during last year’s war, the bridge was bombed twice, the first strike only made wholes in the bridge making it unusable for cars, but that wasn’t enough for Israel, unlike they said they did not to only want to cut the communication routes of Hezbollah, they wanted to destroy Lebanon, so they made a second hit which practically destroyed the whole bridge foundation and made it fall. 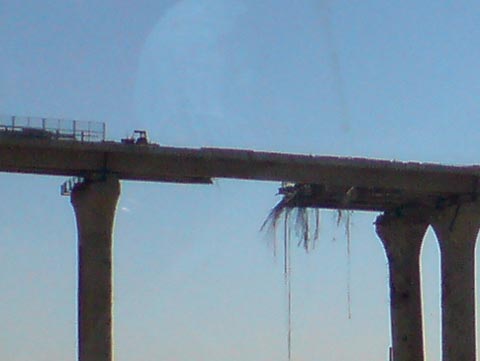 After the war was over the USA promised to rebuild the bridge, but as you can see in these pictures they did not even start yet, so where is all the help the USA promissed us? When every country announced what they were going to rebuild, the media pointed that the USA chose to build the most expensive bridge and Iran took care of the small inexpensive ones, now every day we see on the News a bridge re-build by Iran being opened to the Public, but the construction on the bridge the USA promissed to rebuild did not even start yet! So is Iran better than the USA? The USA needs to fix its Public Relations in the Middle East if they really want to stop the extension of Iran!!

One reply on “The Sawfar Bridge”

When it comes to the USA being a real partner in anything that has to do with Lebanon, they are usually at the end of line if in line at all. Before I moved back to Lebanon, I didn’t understand why all the hostile feelings that Lebanese had towards the US government. After being in Lebanon for a while I started to understand why. I wrote a long letter to the US ambassador in Lebanon (not the current ambassador) giving my view since I see a lot of the future generation in my store and the reaction when the US is mentioned. He actually replied which was a nice surprise however, the response was very short ” we need to work on the misunderstandings”.
So with this type of response and the actions taken by the US in the many years before now, it does not take a super brain to see that the US is not interested in getting in line to help Lebanese people. Yes they are verbally supporting the Siniora government, but even that seems to actually reduce Siniora’s popularity with the Lebanese people. The bridge mentioned in your article makes people curse Israel and even more the US, so by not repairing it soon they are making people hate them more and more. Instead of sending more “SMART BOMBS” to throw at the Lebanese maybe they can throw a few millions to repair the bridge. But I maybe wrong as usuall and it maybe just “MISUNDERSTANDING”