Wednesday Annahar newspaper showed a picture of an LAF helicopter bombing Fath L Islam positions in Nahr L Bared Palestinians refugee terrorists camp, sadly I heard that the bombs the LAF is using are launched from Lebanese made launchers because the countries that “are helping us” fight terrorism help us in a really weird special way, apparently to fight terrorism you need helicopters without missile launchers (UAE removed the launchers before sending the Helicopters) and if things get complicated we get some ammunition, new equipment and heavy arms are something we don’t need to fight terrorism apparently.

The US only makes promises and rarely delivers, it’s still better then other countries who never deliver, but I guess it’s not entirely there fault, let’s face it we will never get decent equipement just from help, we need to buy new stuff from any country that is ready to sell us and it’s the government’s job to find those countries and buy ammunitions.

Anyways in spite of all this the army is fighting and exterminating those terrorists and here’s the picture from Annahar newspaper taken by Michel 7allak. 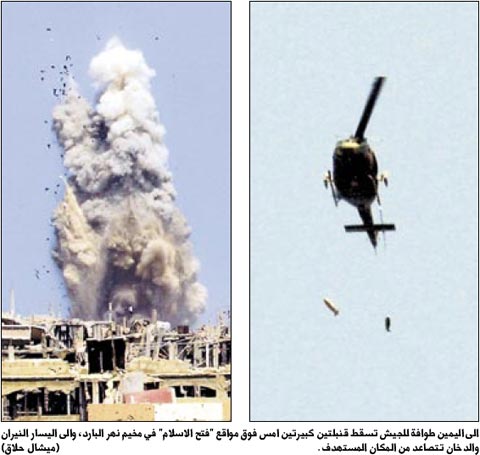