I found this very small worm near the plants outside my office window and took a video of it moving on a POST IT note! notice how it moves and how tiny it is!

The WSPA (World society for the protection of animals) launched a campaign against long distance transport of animals for slaughter and Lebanon is one of the countries accused of making the animals suffer while transporting them.

Here’s what they say about the problem on the WSPA website.

Each week thousands of live cattle undertake a three week journey from the Amazon port of Belem in Brazil to Beirut in Lebanon.

Cattle are crammed into trucks in the burning Amazon heat. For four days they will be unable to move or lay down and will receive no food or water. Those that fall are trapped and injured. At the ship, the use of electric prods for loading further distresses the weakened cattle. Crushed against unfamiliar animals, the cattle can injure each other in their agitation. Heat stroke, trauma and respiratory disease will all be killers on the seventeen day voyage.

On arrival in Lebanon, cattle are often slaughtered in ways that are inhumane and violate religious requirements. After weeks of needless animal suffering, the consumer is misled into believing the meat is ‘Halal’. Humane slaughter, close to home, would not only end the cruelty, it would create jobs in Brazil.

You can check a map of the trip from Brazil to Lebanon with pictures and videos on the original campaign site.

I am for ending cruelty to animals but I don’t really like the solution they offer since it will result in less jobs in Lebanon, instead I think some sort of law that regulates animal transport should be made and applied when transporting animals to and in Lebanon. 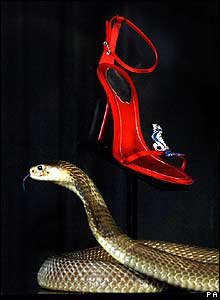 I just saw this on BBC News! They only say that it’s an Egyptian Cobra guarding a bejeweled sandal at Harrods!

I am thinking of getting some cobras for my room if they protect so much! :P

Cicadas (Jar Flies or Zyez in Arabic) are annoying!!! Aoun used to complain about them last year and now it’s my turn!!! I hate them! they don’t stop making that horrible sound! and to make things worst they come and sit on my windows and start making it! 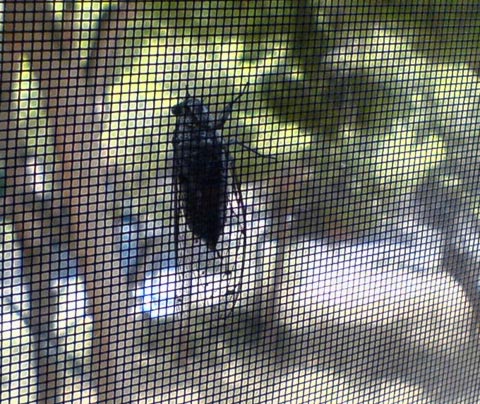 I sometimes wake up at night and they would be “singing” they only stop at 5 in the morning, the birds sing for a while and then around 6 am one of the cicadas restarts and they all follow it!! How the hell do you turn those things off!