You have heard that it was said, ‘An eye for an eye and a tooth for a tooth.’ But I tell you not to resist an evil person. But whoever slaps you on your right cheek, turn the other to him also. If anyone wants to sue you and take away your tunic, let him have your cloak also. And whoever compels you to go one mile, go with him two. Give to him who asks you, and from him who wants to borrow from you do not turn away.

I am pretty sure you all know this paragraph, it is taken from the bible and was said by Jesus when he was teaching the people to forgive each others.

Today priests are supposed to pass on his teaching and the majority of them are doing it. The majority and not all of them because apparently a group of priest in Bethlehem forgot it and started a fight between them in the Basilica of Nativity (One of the most important places in Christianity)! Apparently the fight started because orthodox priests that wanted to clean the Basilica after Christmas trespassed into the Armenian controlled part of the Basilica. This trespassing started a fight involving 50 religious in black robes that lasted for 15 minutes before the Palestinian police stepped in and separated them! At the end 7 people were injured from the fight including 5 religious and 2 policeman. 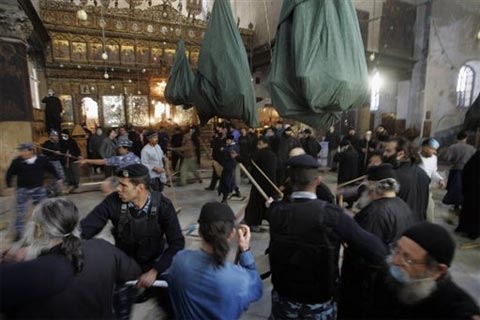