The Lebanese people in general are currently tired of their politicians, and since we have no president, the Christians in particular are feeling that the other communities are eating away their rights. 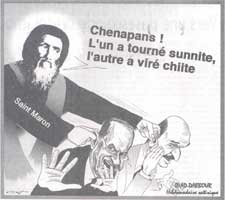 The Christians are divided in 2 camps, the first group is in March 8 and the second one in March 14. Both groups want to represent the Christians. They also want to prove to them that they are leaders in their respective camps, that they just don’t take orders from Hariri and Nassrallah. Currently one person is succeeding in that task and the others are failing.

Since the new chapter of the crisis started (No presidential elections) the Christians in March 14 never took a decision alone, we never saw any of them declare steps that will be taken by their camp, On the

contrary the future movement declared that they will accept a constitutional amendment to elect Michel Sleiman and a lot of news report said that a lot of March 14 Christians didn’t like the fact that they were not informed about that! A lot of March 14 Christian supporters also did not like the fact that Sleiman was going to be our next president and you can clearly see this in many blogs and forums.

March 8 on the other hand gave Aoun the freedom to do whatever he wants even before Day 1 of the new chapter started! Aoun took the initiative and launched his “plan to save

Lebanon” before the day Lahoud was supposed to leave. He did “Christians” talks in Rabieh and published “10 Christians position” with a (Christian) fish as their logo. Hezbollah in the mean time didn’t take any strong position and allowed Aoun to have a lot of Media attention. This didn’t stop some Aounist from saying they will never feel represented without Aoun as president but it did make a lot of them feel happy about what’s happening unlike the March 14 supporters!

That’s not everything, even news reports changed, before the presidential vacuum March 8 was called the “Hezbollah led opposition” now it is called the “Aoun led opposition” so Aoun is now clearly better then Geagea and Gemayel in the eyes of their respective supporters (not the blind ones of course).

One reply on “Christians in March 8 and March 14”

The Victory is getting closer and closer for us the Cristians.Long Live the General Aoun..the only one who can save the Cristians in Lebanon.