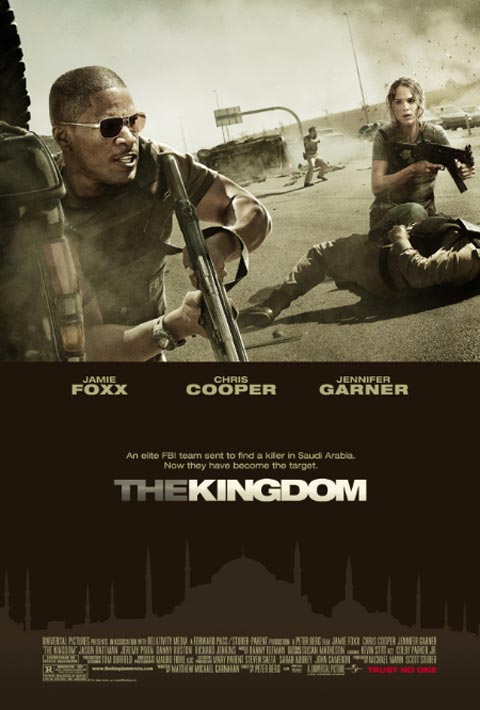 Last night I went to the movies with a friend to watch The Kingdom. We went to Cinema City in City Mall and all the theaters were full so getting our tickets one hour before the movie started was a good thing to do, I just wish we chose some other seats because we were surrounded by two very annoying people. The guy on my right came in with a large popcorn in his hand and before sitting he started unloading his 4 pockets from chocolate bars he brought in with him, so he spent the whole movie eating and moving in his chair. The girl behind me was so excited about the movie that she felt she had to comment on every action scene in it, sometimes giving advices to the actors and shearing them up and some other times commenting on how stupid they were in her opinion.

The movie is banned in many Arab countries so I was afraid they removed some scenes in it here but I think the movie was left intact since all the scenes didn’t have any strange cuts in them. The movie starts with a small documentary about Saudia Arabia followed by a Terrorist attack on a foreigners compound in the country. After the attacks happens an FBI team goes to the Kingdom to try to catch the group behind the act but is slowed down by the lack of cooperation given by the Saudis who feel that the terrorist act is an internal problem. The team finally finds a Saudi Colonel who is ready to help them in the mission to find the Terrorists.

The movie manages to show the real division in the Arab and Muslim street with some supporting terrorism and some fighting it. You can also clearly see the clash of cultures between the West and the East and how each camp sees that his cause is the just one. During the movie you also discover that the only thing both sides have in common is the desire to kill more enemies from the other side forgetting that the enemy is another human with a life and a family of his own.

Every person living in this region of the world should watch this movie, if it’s banned in your country get it on DVD or download it from the net, it is a great movie showing us a lot of stuff we live everyday so make sure you watch it soon.