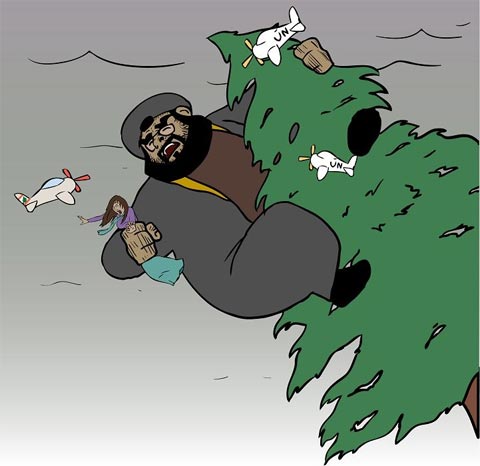 Caricature by Shirin, one of the few people who still dare to criticize Nassrallah

Back then LBCI refused to apologize because they did nothing wrong but today no one dares to make fun of Nassrallah on TV. There is no law against it but you can say they learned the lesson well! A couple of days ago a character on the comedy show “14 – 8 w Na7na” had a dream with all the political leaders in it. They did not show the politicians in a funny way, all what the character did was tell us his dream. He told us about Saad Hariri, Walid Joumblat, Nabih Berri … but when he wanted to talk about Hezbollah he didn’t say he dreamt about Hassan Nassrallah, instead he chose some Hezbollah deputy to represent the party.

That wasn’t the first time people avoid Nassrallah in comedy shows, Bass Met Watan never caricaturized Nassallah after the “incident”, now whenever they want to talk about Hezbollah they also show a Hezbollah deputy. On New Year when Grey Worldwide made a clip with Lebanese politicians in it you could see everyone except Nassrallah who was replaced by Hussein Hajj Hassan. I never even saw Nassrallah on La Youmal a clearly anti 8 March pro 14 March show on a pure 14 March Station!

So why did TV shows stop caricaturing Nassrallah, are they afraid of the consequence, did Hezbollah draw a red line when they went crazy after Bass Met Watan?

One reply on “Are people afraid of caricaturing Nassrallah?”

are they afraid of the consequence
not really, he is being vigorously criticized, more than before, for his political stands, listen to Jumblatt et al,
but his position as a man of the cloth hinders the “making fun” of his character part.
there is something (a law or maybe an unwritten law) in Lebanon that does not allow caricaturing religious figures.