Today Naharnet is reporting that the police launched an investigation about a game in which the player is supposed to storm the Serail and kill Sanioura and all his ministers. I googled a little for the game but found nothing, I remembered seeing a game about the battle of Nahr L Bared on an anti 14 March blog so I guessed he could have also made the other game and tried to find the blog but it was unavailable! I first thought I reached the wrong page so I reggogled and this time I used >anti 14 march blogspot< as search words. I was right the first time,the blog was correct and it is now closed but Google has a nice feature called “Google Cache” so I checked the site using it and found the original page. 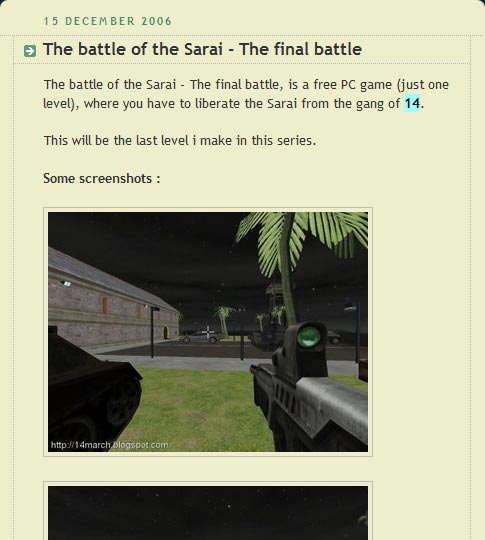 The guy that made this game is really weird! People are allowed to have different political opinions! but wanting the opponent dead is just crazy!!

5 replies on “The anti 14 March Game (Kill Sanioura and the government!)”

Wishing not to get into details, this is absolutely horrendous! Hatred or opposition of someone’s views is one thing and promoting their death through a silly game on the internet is another thing. It could incite some crazy sick person to actually execute it in real life. we all know about the Virginia Tech murderer and how a MOVIE may have inspired him to develop criminal tendencies.

poshlemon, the problem in Lebanon is that someone is actually executing this (not by attacking the serail but they are doing it gradually! killing them one by one) this game is just there to allow people with sick minds to do something similar!

Excellent detective work. I heard about this game today before Naharnet put it up by a bit and put up a post about it that is generating some emotional replies. In any case from the screenshots that I found I could tell that the original hosting place was a blogspot address (it was written on the screen shots but a bit blurry) and attempted to track it down. But as you mentioned, the site was closed.

I’m gonna link to the google cache you found and H/T you if you don’t mind.

Thanks
And of course I don’t mind

[…] The game which March 14’s media purports to be “easily accessible on the internet” has generated a lot of online activity from people who just want to fulfill their curiosity. But still, they didn’t find it, I didn’t find it, and I don’t know of any other blogger who did. (Update: Eliedh found it and explained how) […]