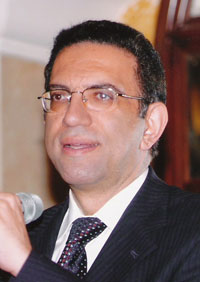 Elie El Khoury is currently posting every day in his blog a topic addressed by Dimyanos Kattar in his various public appearances. He allready covered 4 topics which are:

By reading the posts you can tell that Kattar is not like the other presidential candidates, he does not come from a feudal family, he respects everyone and he has the will to work to build a better country.

I recently watched parts of an interview with him on NTV and discovered that this man is more than just an economist. During the war he was part of the red cross so he witnessed the atrocities committed by all the parties and helped ease the suffering of the Lebanese instead of taking sides like all the other presidential candidates. After the war he worked on many economic projects for Lebanon eventually becoming the minister of economy and finance in Mikati’s government. During this period Lebanese started to know him better and I personally admired the work he was doing and was surprised to see during one of the interviews that his home is just a modest normal home unlike the homes of the standard Lebanese politicians.

Kattar has all the qualifications that enable him to become a good president but in Lebanon people like him rarely succeed, he is an educated, clean person who worked for Lebanon all his life but can he lead the country with all those crazy politicians in the wild, how will he make a government liked by everyone and not be attacked by everyone? In a normal country he would make a great president but can he change anything in Lebanon if he does not receive some backing from the people?

3 replies on “Should Dimyanos Kattar be the next Lebanese president?”

thanks for sharing it with us. I’ll check it out.

[…] Demianos Kattar Explained   A fellow Lebanese blogger has a series on Demianos Kattar that is worth reading. It is basically a collection of Mr. Kattar’s take on 5 issues: • The role of the young generation • The role of Lebanon • The Middle Class • The Role of the Diaspora • Traditional Politics and State Governance (Hat Tip Eliedh) […]